Poison Gas, The Inniskillings and Poor Finnegan in World War I

by John B. Cunningham

The headline in the Fermanagh Herald of May 13th read INNISKILLINGS GASSED. ULSTER JOURNALIST’S DEATH. SERGEANT P.P. FINNEGAN.  Finnegan was well known in Enniskillen and a popular journalist as testified below by his colleagues. The following is a copy of a letter from Lieutenant E. Gallagher, 7th Inniskillings to his brother Mr Henry T. Gallagher, Crown Solicitor, Strabane.

John Singer Sargent was commissioned as a war artist in 1918.

Dear Harry, – Just on my way somewhere; we are in a hospital train, and it’s like our own officers mess, so many of the old hands are here, gassed.  As for the Irish, they easily carried the day, men and officers.  I was gassed in the second attack (gas) after having a good half hour bowling over Bosches and looking forward to another good time.  My platoon sergeant, poor Finnegan – was with me and he did buck us up; he kept shouting on the Bosches ‘Come on Fritz; we have some lovely presents for you,’ and they got them.  Then when the Bosche saw he had failed he sent us more gas and it was terrible seeing poor fellows dropping on all sides.  Then I felt my own time coming; words could not describe it.  I had my helmet on, but it must have had some defect.  However, I began to feel the gas: first it made me gasp; and then it turned me blue; my chest weighed a ton and my head was ready to crack and I coughed until I thought I would cough my insides up.  I thought I would try and find the dressing station.  On my way I came across poor Finnegan and he was as bad; we got on about 100 yards when we both collapsed.  We just clung to one another and Finnegan said ‘Sir, we have no chance.’  I agreed as I was exhausted.  Finnegan shouted out: ‘By God, Sir isn’t it terrible to die like this! If we had only got a sporting chance; but no one could beat this.’  After half lying, half standing, clinging to one another for about 10 minutes and going through terrible agony, I said to Finnegan, come on let us make one last effort, and we did.  I helped poor Finnegan along.  At last he said, ‘Go on sir, I am done.’  However we plodded along creeping and walking in a trench with two feet of mud.  I found myself at the dressing station about done up. I sent out a party for Finnegan, but he could not be found.  He was found that night dead.  A plucky soldier – he had no fear.

Our boys did well.  Harry, if you could have seen them it would have delighted you.  There was no pause, every man went at it, and after the first attack they actually fought as to which company had the best ‘bag’ outside their parapet and to hear them bragging ‘that fellows helmet beside your big shell hole is on our side of the wire.  It was glorious and I was just thinking how pleased the people at home will be when this will be told in full.  Then in a day’s time I got a paper and what do I see?  This terrible rebel rising in Ireland.  Poor old Ireland!  Betrayed again!  I am getting along as well as can be expected.  It takes time to get the gas out of one’s system.  However a few weeks will make me fairly up to the knocker. Best love to all in Dunwiley. Harry. May be home sooner than I expected.  I.R.

Poison gas was probably the most feared of all weapons in World War One. It was indiscriminate and could be used on the trenches even when no attack was going on. Whereas the machine gun killed more soldiers overall during the war, a death that was frequently instant or not drawn out and soldiers could find some shelter in bomb/shell craters from gunfire, a poison gas attack meant soldiers having to put on crude gas masks and if these were unsuccessful, an attack could leave a victim in agony for days and weeks before he finally succumbed to his injuries. It is generally assumed that gas was first used by the Germans in World War One. This is not accurate. The first recorded gas attack was by the French. In August 1914, the French used tear gas grenades containing xylyl bromide on the Germans. This was more an irritant rather than a gas that would kill. It was used by the French to stop the seemingly unstoppable German army advancing throughout Belgium and north-eastern France. In one sense, it was an act of desperation as opposed to a premeditated act that all but went against the ‘rules’ of war. However, while the French were the first to use a gas against an enemy, the Germans had been giving a great deal of thought to the use of poison gas as a way of inflicting a major defeat on an enemy. In October 1914, the Germans attacked Neuve Chapelle. Here they fired gas shells at the French that contained a chemical that caused violent sneezing fits. Once again, the gas was not designed to kill but rather to incapacitate an enemy so that they were incapable of defending their positions.

This took place against a background of a war in the west that was still mobile. Once trench warfare had literally dug in all sides involved in the conflict looked for any way possible to bring movement back into their campaigns. One of the more obvious was to develop a weapon that was so appalling that it would destroy not only an enemy frontline but also the will to maintain troops on that frontline. Poison gas might even provoke a mass mutiny along a frontline thus causing it to collapse. In other words, poison gas was the answer for the war’s lack of mobility. Poison gas (chlorine) was used for the first time at the Second Battle of Ypres in April 1915. At around 17.00 hours on the 22nd April, French sentries in Ypres noticed a yellow-green cloud moving towards them – a gas delivered from pressurised cylinders dug into the German front line between Steenstraat and Langemarck. They thought that it was a smokescreen to disguise the forward movement of German troops. As such, all troops in the area were ordered to the firing line of their trench – right in the path of the chlorine. Its impact was immediate and devastating. The French and their Algerian comrades fled in terror. Their understandable reaction created an opportunity for the Germans to advance unhindered into the strategically important Ypres salient. But even the Germans were unprepared and surprised by the impact of the gas and they failed to follow up the success of the chlorine attack. What did occur at Ypres was a deliberate use of a poison gas and now, other nations with the ability to manufacture poison gas could use it and blame it on the Germans as they had been the first to use it in this fashion.

The first nation to respond to the Ypres gas attack was Britain in September 1915. The newly formed Special Gas Companies attacked German lines at Loos. In the Ypres attack, the Germans had delivered their chlorine by using pressurised cylinders. For the attack at Loos, the British also used gas cylinders. When the wind was in a favourable direction, chlorine gas was released from the British front line so that it could drift over to the German front line. This was then to be followed by an infantry attack. However, along parts of the British front line, the wind changed direction and the chlorine was blown back onto the British causing over 2,000 casualties with seven fatalities. The Special Gas Companies were not allowed to call their new weapon gas – it was referred to as an “accessory”. However, the risk of the wind blowing gas back onto you also affected the Germans and French in some of their gas attacks during late 1915. 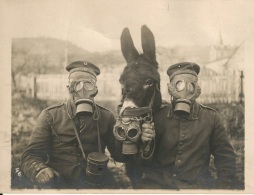 Two German soldiers and their mule.

The development in the use of poison gases led to both phosgene and mustard gas being used. Phosgene was especially potent as its impact was frequently felt only 48 hours after it had been inhaled and by then it had already bedded itself in the respiratory organs of the body and little could be done to eradicate it. Also it was much less apparent that someone had inhaled phosgene as it did not cause as much violent coughing. By the time that phosgene had got into a person’s bodily system, it was too late. Mustard gas was first used by the Germans against the Russians at Riga in September 1917. This gas caused both internal and external blisters on the victim within hours of being exposed to it. Such damage to the lungs and other internal organs were very painful and occasionally fatal. Many who did survive were blinded by the gas.

By the time the war ended, the main user of poison gas was Germany, followed by France and then Britain. Though poison gas was a terrifying weapon, its actual impact, rather like the tank, is open to debate. The number of fatalities was relatively few – even if the terror impact did not diminish for the duration of the war.

The British army (including the British Empire) had 188,000 gas casualties but only 8,100 fatalities amongst them. It is believed that the nation that suffered the most fatalities was Russia (over 50,000 men) while France had 8,000 fatalities. In total there were about 1,250,000 gas casualties in the war but only 91,000 fatalities (less than 10%) with over 50% of these fatalities being Russian. However, these figures do not take into account the number of men who died from poison gas related injuries years after the end of the war; nor do they take into account the number of men who survived but were so badly incapacitated by poison gas that they could hold down no job once they had been released by the army.

Armies quickly produced gas masks that gave protection as long as sufficient warning was given of a gas attack. Soldiers also used make-shift gas masks if they were caught in the open without a gas mask during a gas attack – cloth soaked in their own urine and placed over the mouth was said to give protection against a chlorine attack. By the end of the war, relatively sophisticated gas masks were available to soldiers in the trenches on the Western Front.

The Fermanagh Herald paid tribute to their former reporter as follows: – Sergeant Finnegan was, prior to joining the Inniskillings, a member of the reporting staff of the Fermanagh Herald and was well known all over the North West.  He was an able and reliable journalist and was held on the highest esteem by his colleagues and by everyone who came in contact with him in the discharge of his duties.  He was a prominent member of the National Volunteers and as Lieutenant Gallagher says was a plucky and fearless soldier.  He was the typical Celt, genial, kindly, and good natured, and a sparkling wit, his gifts as a raconteur and his mellow brogue gave him a warm reception in social circles.  He was a splendid Gaelic scholar, and was able to report the most fluent Gaelic speakers, an accomplishment which few Pressmen possess.  His remains now rest in France – far from Kilkenny and the banks of the silvery Nore where his childhood days were spent.  That his soul may rest in peace is the earnest prayer of his former colleagues.  We tender our sincere sympathy to his relatives in their bereavement.