When, seen in print, before my eyes

The old round tower seemed to rise,

With silent scorn of noisy fame.

No sound disturbs the solemn rest

Save kiss of oar and whisper’d word.

Of gold and blue and tender green;

And in the setting of the scene

A little hand is placed in mine;

My blood runs wildly as with wine –

We stand together on the shore.

In vain I wish you back again!

How glorious, after all, thou art!

Where mould’ring bones once knelt in prayer,

These any ‘tourist’s book’ recalls.

The sweet romance of long ago,

All these have vanished, as the glow

Of eventide fades out at night.

From “The Prophecy of Merlin and other poems.” 1870 by John Reade.

Although born in Ballyshannon, John Reade’s parents, Joseph Reade and Mary John Reade came from Pettigo. He emigrated to Canada in 1856 where he became one of the best known Canadian poets of the latter half of the 19th century.  At his death he was described as “The Dean of Canadian Literature.” He became general editor of the Montreal Gazette and held this position for the rest of his life. In 1870 he published a much acclaimed volume of verse entitled “The Prophecy of Merlin and other Poems”. This volume made his name in Canada. He was a wonderful linguist and translated poetry from Latin, Greek, Italian and French. He died unmarried and is buried in Montreal. John Reade took a keen interest in Canadian politics and fervently supported the idea of Canadian Confederation. 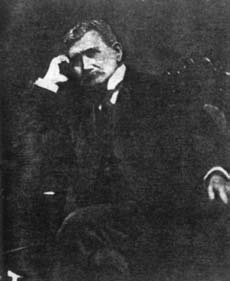 He never forgot Ballyshannon and this poem about the town was in “Treasury of Canadian Verse” by Theodore H. Rand of Toronto in 1910 and in many other collections of verse. It is a lovely pen picture of Ballyshannon as he remembered it in the middle of the 19th century.

The hills, the sea, the bridge, the waterfall.

Although the eastern clouds are tinged with red.

And everything is as of this graveyard still,

Except the soldiers at their morning drill,

And in the Pool a fishing boat or two

And the dim curlews on the distant shore,

And the lark soaring through the ether blue.

And now the lazy smoke curls through the air –

I will go down and see who tenant there,

And see what friends of thine are underground!

The mountains gather round thee as of yore,

Was borne the saint who to the farthest west

Brought the sweet knowledge that transcends all lore.

There on the islet at the chapel door

The penitents are kneeling, while along

There flows the mystic tide of sacred song

To where I stand upon the rugged shore.

But now there is a silence weird and dread –

And utter loneliness is in my heart.

It came to seek the living but the dead –

This is their welcome.  Slowly I depart,

Nor read the name beneath a single cross –

He still is rich who does not know his loss.

There is the schoolhouse, there the lake, the lawn;

And there, just fronting it, the barrack square;

But of all those I knew not one is there –

Even the old gatekeeper – he is gone.

This grassy mound, with what proud hopes elate

I was to wrestle with the strength of fate

Oh! happier those whose lot it was to fall

In noble conflict with their countries foes

Far on the shores of Taurie Chersonese!

Nay, all are blest who answer duty’s call,

But – do I dream our wake?  What ghosts are these?

Hush, throbbing heart!  These are the ghosts of those.

Oh!  what could wake to life that first sweet flame

That warmed my heart when by the little bay

On blissful summer evenings I lay

Beneath our thorn-bush, waiting till she came

Who was for me far more than wealth or fame,

But yet for whom I wished all fair things mine,

To make her, if she could be, more divine

By outer splendour and a noble name.

Now I may wait in vain from early morn

Till sunset for the music of her feet.

And yet how little change has come upon

This fairy scene her beauty made so sweet!

It weareth still the glory of her smile.

Ah!  If she were but here a little while.